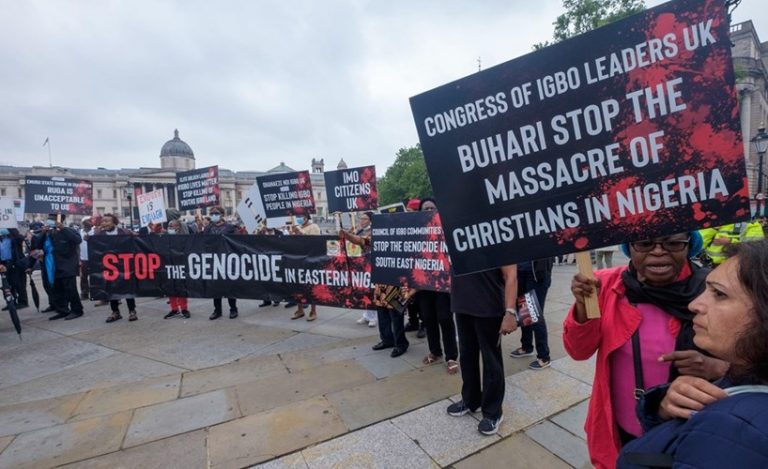 Western governments and media outlets have accepted the “politically correct narrative” that the killing of thousands of Christians in Nigeria is the result of climate change and a fight for economic resources, the Primate of Nigeria, the Most Revd Henry Ndukuba, said this week. They had chosen to “ignore all the indices that show that minority Christian tribes are systematically being wiped out by radical Islamic Fulani militia terrorising the region”.

He was speaking a week after peers in the UK, including the former Archbishop of Canterbury Lord Williams, wrote an urgent letter to the Foreign Secretary, Dominic Raab, warning that in Nigeria “religious affiliation is instrumentalised increasingly to recruit or inspire violent acts and predominantly-Christian communities are attacked for reasons connected with their faith.”

In an impassioned statement on Wednesday, Archbishop Ndukuba said: “Understandably, western governments do not want to be accused of fanning islamophobia . . . when they acknowledge that religion is the driving force for these senseless killings. . .

“The Nigerian government denies the role of religion, particularly a jihad, in the attacks against Christians in many parts of Nigeria, and yet acknowledges the collaboration between Boko Haram and Fulani militia that has set out to destroy the citizens of Nigeria. . . It is much more comfortable to attribute the massacres to ‘unknown gunmen’ or ‘armed bandits’.”

He described how “multiple villages usually come under attack by hundreds of Fulani gunmen at night. Women and children are killed in their sleep and many who try to flee are hunted down and chopped down with machetes . . . The villages are taken over by the armed Fulani. The names of the villages are changed into an Arabic name. Thousands of people have been displaced for more than seven years and cannot go back to their communities . . .

”How can this be explained away as a conflict between women with hoes in their hands working in their farms and Fulani militia with AK 47 fire arms?” Millions had been paid to Fulani kidnappers in recent months.

“We do not believe that the Nigerian government has the political will to stop the killings. . . Those saddled with the responsibility to stop the killings, bring the perpetrators to justice, and reconcile the religious and social divide lack the will, capacity and fairness to do so.”

The global Church could pray for Nigeria, he said, and politicians in the West could “engage their governments to work to stop this evil”. He observed: “The silence of the World Council of Churches and other religious and socio-political organizations is deafening and speaks volumes to the Christians in Nigeria.”

The peers’ letter criticises the decision not to include Nigeria in this year’s human-rights report by the Foreign, Commonwealth and Development Office (FCDO), published last month, pointing to “daily reports of terrorist violence, mass forced displacement, the rise in abductions for ransom and a general backsliding on democratic practices”. Nigerian citizens are “at the mercy of non-state actors who have been allowed to evolve”, it says, and refers to the recent downing of a jet by bandits in the north-west.

Among the examples of human-rights violations to which it refers are the murder of the chairman of the Christian Association of Nigeria by a faction of the Islamic terrorist group Boko Haram (News, 24 January 2020) and the continued captivity of Leah Sharibu, a Christian schoolgirl kidnapped in 2018 (News, 21 February 2020).

On 18 July, the International Society for Civil Liberties and Rule of Law, a Nigerian human-rights organisation, reported that “the number of defenceless Christians hacked to death by Nigeria’s Islamic Jihadists and their collaborators in the security forces in the past 200 days or 1st January to 18th July 2021 has risen to no fewer than 3462 . . . those responsible for the anti-Christian butcheries in the country have continued to evade justice and remained unchecked, untracked, uninvestigated and untried; leading to impunity and repeat-atrocities.”

The majority of killings were the work of “Jihadist Fulani Herdsmen”, it said.

The data were collected through “direct contacts with the victims, eyewitnesses, media tracking, review of credible local and international reports, interviews and closed sources and so on”, the report said. It lists “the 2021 Nigeria Weekly Security Tracker of the Council on Foreign Relations, courtesy of John Campbell, former US Ambassador to Nigeria”, as a source of its statistics.

But, last week, Mr Campbell, who was ambassador from 2004 to 2007, cautioned against attributing the violence to religious causes. There had been a “huge uptick in violence” in Nigeria, he said, but “religious tension varies considerably from one part of the country to another.”

In the Middle Belt, where much of the violence ascribed to religion took place, there were “faultlines that line up. You have Hausa Fulani herders being driven south by climate change, and by the Sahara creeping south, moving south to find pastures for their cattle. There they collide with minority ethnic groups — mostly Christian — who are farmers. So the cleavage lines all line up: religion, ethnicity, land, and water use.

“When a village is destroyed, and the population is massacred, are they being massacred because they are Christian, because they are farmers, or because they are members of a particular ethnic group? It becomes very difficult to sort it out, and normally to get an answer to what was the cause of the violence you need a much more granular knowledge of the circumstances behind the massacre.”

In a country with an “extremely weak” state apparatus, including about 300,000 police for more than 200 million people, many episodes of violence were not investigated, and the media often used a “Christian-Muslim dichotomy . . . almost as a kind of shorthand”.

He agreed that it was important for policy-makers in the international community to talk to religious leaders, who were “amongst the most powerful and influential personalities in Nigeria”. His advice to Christians in the UK was to “ask lots of questions and make sure you get your facts right. What is your source for the claim that the massacre of Village X was the result of Village X’s religion?”

There was also a need for “a lot more humility than we Westerners normally have — that we literally do not understand what the particular dynamics might be in a particular region or area”.

Among the signatories to the letter to the Foreign Secretary is the chief executive of Christian Solidarity Worldwide (CSW), Sir Mervyn Thomas. Last week, CSW issued a statement arguing that a rise in attacks on minority tribes in the Middle Belt “constitutes more than age-old competition for resources, tit for tat violence, or the effects of climate change. It more closely resembles a campaign of ethno-religious cleansing that includes deliberate efforts to inflict starvation and effect total economic disempowerment. Similar attacks are now occurring in southwest and southeast Nigeria with increasing frequency.

“International intellectual wrangling over the nature of this violence, and whether and to what extent religion is a factor, has served to obscure the emergence in Nigeria of a network of organised armed groups with ready access to small arms, that reportedly includes foreign elements and now operates throughout the country terrorising civilians, with minority ethnic and religious groups bearing an alarming burden of death and loss.”

The statement concluded with reference to a 2020 report by the UK All-Party Parliamentary Group for International Freedom of Religion or Belief, which identified the danger of genocide in Nigeria’s central states.

This article was written by
byMADELEINE DAVIES for Church Times UK