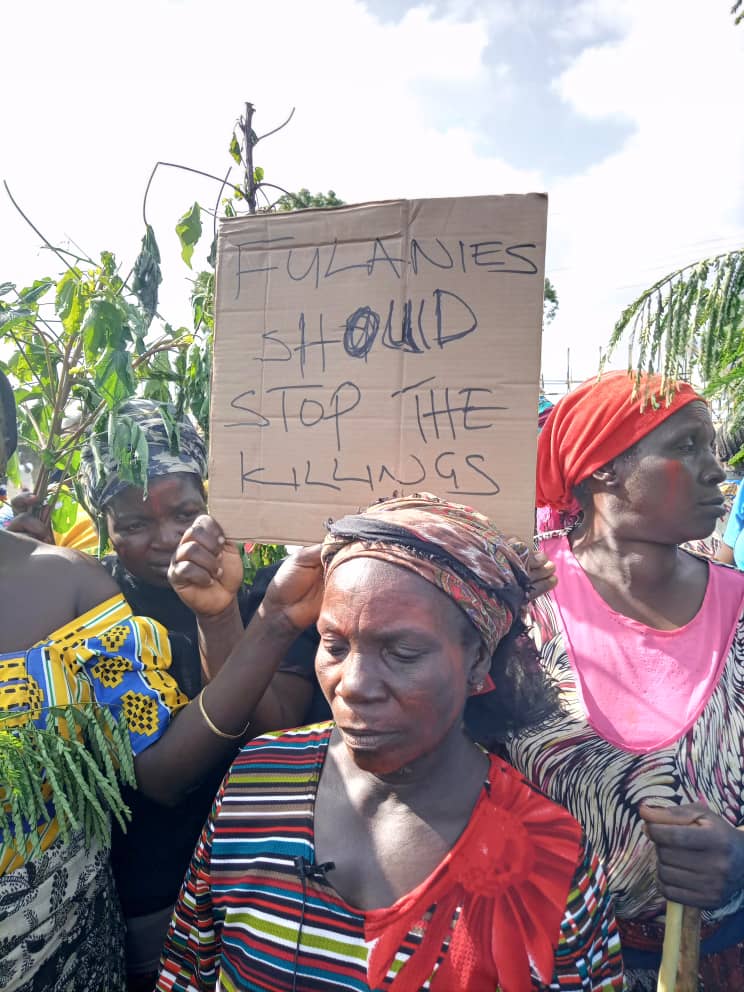 The protest is to decry the killings of 2 natives namely, Mr. Titus John, 32 years and Mr Iliya Dalyop, 50 years characterizing part of the state of insecurity bedeviling Plateau State particularly, villages of Riyom and beyond.

A spokeswoman at the protest, Mrs. Garose Dauda said, “in Byei, 30 people have been so far killed because of Fulani. They have killed many people, and farmed crops destroyed.”

She added, “do I have the strength to farm and feed our children now? I don’t have the strength or food to give the children. Whenever the Fulani mow down our farms and we report to the soldiers, they will tell us that they came not for us but for the Fulani.” She passionately cries out tha “please, withdraw the soldiers, for it’s enough of this. We cannot be able to fend for the orphans left now. In my family, all men have been killed, I’m speechless. Please, come to our rescue” she repeatedly pleaded.

There were times the military come without knowing. They have killed 2 people in Byei and 4 in Kum villages, mostly perpetrated by military. Please, help us withdraw the soldiers so we could have peace” in tears she screamed.

She further said, “the soldiers collude with the Fulani on that hill to attack us; We usually see them. There were times Fulani bring Cows, Sheep, Goats, Turkeys to the soldiers….. Just help us withdraw the military, for they have caused increase in the number of widows and orphans whom we don’t have the strength to meet their needs.”

In expressing the helplessness of the situation, Mrs. Tabitha added, “we leave the soldiers and everything to God. This is because when the soldiers were withdrawn from the hill last Sunday, they told us that since we didn’t want them, they will come back for us and on that evening, Byei was attacked. Our children have been exposed to cold weather, and women to so many illnesses.

In reconfirming the incident of killings, the lone escapee of the last night attack, Mr. Pam John of Kum village in Riyom LGA states that, “based on what we have been told that Fulani have planned to attack us happened between Sunday and today, we witnessed an atyack last night, 13th July.

This happened when we were on a watch against the said attack then, lo and behold at about 8:00pm, we saw 2 people approaching us. When we asked who they were, but didn’t answer, and so we thought they were our people coming to join us. Suddenly, we observed they were in military, and immediately opened gunfire at us.

It was then I knew they came to killed and indeed, two of my colleagues were shot dead, but I narrowly escaped,” Pam described the incident emphasizing about the withdrawal of the military from Dariel area which didn’t augur well with the security agents before the removal of their tents, that the natives should anticipate the aftermath of their evacuation.

The village Head of Kum, Mr. Ezekiel Tengong expressed his displeasure over the dereliction of duty exhibited by the military whenever called upon by the natives in distress call.

He said, “it has been long we have been concerned about the series of problems occasioned by military and Fulani, and whenever we report, no attention has ever been given to our plight. We registered our protest that we no longer want soldiers here…” That agitation led to the withdrawal of the security, but was said to have been accompanied with threat of invasion as the consequence of such development thereby engulfing the precious lost last night.

Report filed by Emancipation Centre for Crisis Victims in Nigeria